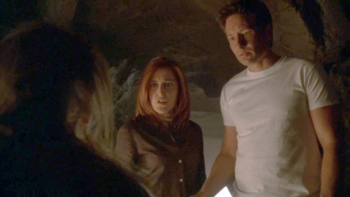 The expected reactions to a chain-smoker long thought dead.
Written by Chris Carter
Directed by Kim Manners
Scully: Mulder, Kersh told us to head north. You just got on a road going south.
Mulder: That's right.
Scully: Where are you going?
Mulder: To see a man about the truth.
Advertisement:

The show trial ends badly for Mulder, but his friends bust him out with unexpected help from Deputy Director Kersh. Despite being advised to flee the country, Mulder and Scully head for New Mexico to meet with the anonymous informant who helped Mulder find the files about the alien invasion.