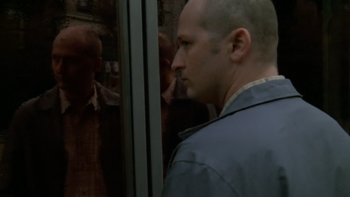 erehT tuO si hturT ehT Translation "The Truth is Out There" typed backwards.
Written by Steven Maeda
Directed by Tony Wharmby
"We've got the block surrounded. He isn't vanishing anywhere. And your partner volunteered. Now, open the 4-D."
— Brad Follmer, who was talking about a letterbox, but unintentionally meant something far more sinister.
Advertisement:

A serial killer who can travel between parallel universes targets Doggett and Reyes.