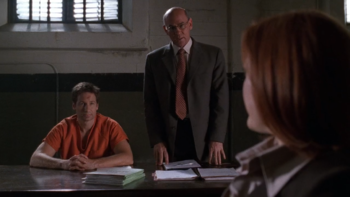 "I know things. It's better you don't."
Written by Chris Carter
Directed by Kim Manners
"My trial's a forgone conclusion. What they really want is for me to admit my guilt and help them out. What's really on trial here is the truth."
— Fox Mulder
Advertisement:

Mulder is caught by the supersoldier Knowle Rohrer accessing classified government documents about the upcoming alien invasion. In the ensuing fight, Rohrer sustains an injury that would have killed a normal human, which Mulder's enemies use as an excuse to put him on trial for murder and discredit him.

Originally aired as a movie-length finale, "The Truth" was edited into two normal-length episodes for syndication. This recap section treats it as two episodes.

"I got nothing else."