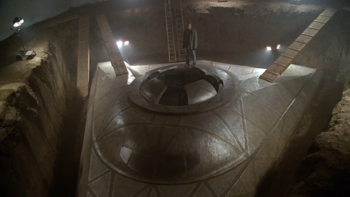 And into the light.
Written by Chris Carter & Frank Spotnitz
Directed by Chris Carter
"You tell me on that ship is written scripture from the world's great religions. Tell me a religion that decrees the death of a child. Not just your child, but any child. This is a man saying these things to us."
— Monica Reyes
Advertisement:

Advertisement:
Kersh: Congratulations - it would appear now that everything is dead but this case.
Toothpick Man: I'm sure I can take care of that, Deputy Director. Quite sure.