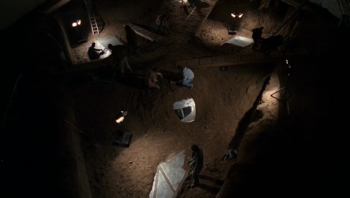 Out of the earth...
Written by Chris Carter & Frank Spotnitz
Directed by Kim Manners
Doggett: The set of rubbings the man smuggled over the border doesn't match the rubbings you took.
Scully: Wait a second. How can that be?
Reyes: It could only be that this whacked UFO cult found a second spacecraft.
Advertisement:

Another buried alien spaceship is found, which stemmed from the pursuit of a man possessing documents containing symbols from that vehicle. And for some reason, he has his eyes set on Scully's baby, William.