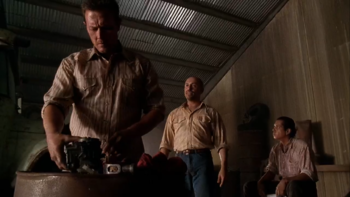 "This town... people like you come here to disappear."
Written by Vince Gilligan
Directed by Michelle MacLaren
"My partner has disappeared, too. He's in Mexico, I know that much and I will find him, whatever it takes. Your only personal hope for the future is that I find him alive. Now, where is he?"
— Monica Reyes
Advertisement:

Doggett wakes up in an abandoned warehouse in Mexico with no memory of how he got there or who he is.

"I'll take the bad as long as I remember the good."