Recap / The Good Place S3E05 "The Ballad of Donkey Doug" 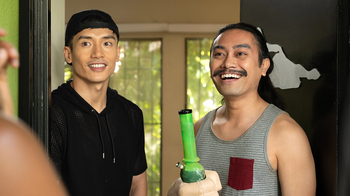 "Dang, nice pull, son! [to Tahani] How about you and me go check out my Jacuzzi and put stuff in each other?"
"I'm sorry. The man you call Donkey Doug is your father? [...] The Donkey Doug with whom you tried to blind airline pilots with laser pointers?"
—Tahani

The newly christened Soul Squad goes their separate ways to begin to help people. Jason, Tahani (who broke up with Larry Hemsworth), and Michael go to Jacksonville to try to save Jason's father, Donkey Doug. Chidi, Eleanor, and Janet stay in Australia, where Chidi tries to figure out how he's going to break up with Simone.

Janet knows everything about human nature and also computer programming, so she offers to create a virtual reality simulator where Chidi can practice different breakup scenarios. Eventually, Chidi figures out an approach based on the top ten of these scenarios, but when he gets to a cafe to do the breakup in real life, it all goes wrong: they're at the wrong table and the waiter keeps interrupting them. Finally he just blurts out that he wants to break up with her. Later, they have a (slightly) more mature conversation and agree to go their separate ways, with Simone continuing the research study.

In Florida, the trio's plan is to talk Donkey Doug into getting his electrician's license. But when the gang meets him, he has other ideas: he and Pillboi intend to get rich by selling a body spray/energy drink combination. Tahani and Michael are almost willing to go along with this, but then it turns out that they plan to get their stock by robbing a body spray factory and an energy drink factory (and also a bottle factory). Jason decides that his father is a lost cause and they should focus on saving Pillboi instead.

Tahani visits Pillboi at the nursing home where he works and tells him that they don't need him at the factory. Jason goes in his place and tries to talk Donkey Doug out of including Pillboi in anymore schemes; when the police show up, Donkey Doug offers to distract them while Jason runs out the back. Afterward, the gang all meet up with Pillboi again. They tell him a ridiculous story about being astronaut spies from NASA who need him to be an undercover agent at his nursing home. This means that it's crucial that he be as nice as possible to everyone and also that he doesn't do anything illegal.

In the end, everybody meets up in Budapest, where they plan to try to reconcile Tahani with her sister. When Eleanor laments that she'll never get any closure with her own family as both her parents are dead, Janet and Michael reveal that Eleanor's mother is actually still alive. Eleanor declares that she won't be helping save Kamilah, as she has to go murder her mother instead.