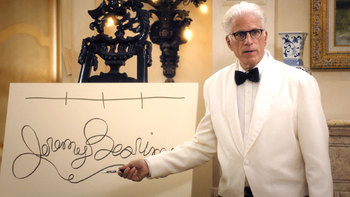 "I don't know what to tell you. That's the easiest way to describe it."
"I'm gonna remember this day forever because of your dope speech and also because of the great tacos I had and also because I got married and I found out I was going to hell and also I became a hundred-millionaire."
— Jason

Michael desperately attempts to explain away the magic door he just opened, claiming that he and Janet are FBI agents but Eleanor is having none of it. Finally, he breaks down and reveals the truth. This means the four humans are all doomed to spend eternity in the Bad Place; now that they know how the points system works, their motivation is compromised and there's no way for them to earn any more points.

Eleanor reacts to this by heading to a bar to get drunk. While she's at the bar, she finds somebody's wallet, but after attempting to keep the money and finding she can't go through with it, decides to find its owner and return it to him. The owner of the wallet thanks her for giving him back his wallet, as it contained a drawing from his daughter who he doesn't get to see much due to his job.

Chidi, meanwhile, melts down. After quoting Nietzsche to a drug dealer and ripping off his shirt in a public park, he goes shopping for an absurd amount of junk food (and almond milk), and then makes and eats some incredibly disgusting junk food chili and rants about nihilism in front of his confused students.

Tahani, on the other hand, is determined to do good deeds nonetheless and gets Jason to act as her bodyguard while she makes an anonymous donation to the Sydney Opera, but he convinces her to give the money away to random strangers instead. Later, she decides to give her entire fortune to Jason. When the bank won't allow her to do that, the two of them get (platonically) married instead, so he can have half of her money.

Janet and Michael sit down to write a manifesto. Even if this experiment failed, they decide that maybe there's hope that they can help some future experiment succeed.

At the end, the six all meet up again. Eleanor convinces them that even if they're all doomed, they might as well spend their lives trying to help as many other people as possible get into the Good Place. They all agree... and then Larry Hemsworth shows up, expecting to fly back to England with Tahani and get married.