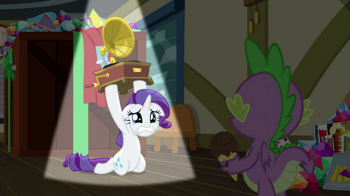 To apologize, Rarity may not have to Say Anything....
Written by Josh Haber
Advertisement:

Early one morning, Rarity goes into Spike's room to get him to travel with her to the gem caves to gather jewels. However, Spike is uncharacteristically ignoring Rarity, distracted by a letter he has to take to the post office. After attempting to do her chores with replacements for Spike but to no avail, Rarity confides in Twilight, wondering what she could have done to make Spike mad at her. Twilight suggests that Rarity has perhaps hurt Spike's feelings in some way, which makes Rarity rush to the post office, ready to apologize... Even if she doesn't know what she's apologizing for.

At the post office, Rarity meets Gabby, the mail-delivering griffon of Griffonstone. While there, Spike enters, and Rarity gives an overly-dramatic performance to say she's sorry to Spike. However, Spike's not mad at Rarity at all; the reason he rejected her offer is because he'd already made plans with Gabby. The two had been pen pals for a while, and enjoy each other's company. As time passes, Rarity has to watch Spike and Gabby hanging out more often, while she struggles to do her chores alone and grows more jealous of them. Eventually, Rarity convinces Spike to abandon his plans with Gabby to go gather a hoard of gems, go to a Power Ponies convention, and play Ogres & Oubliettes. While Gabby is okay with this at first, she eventually grows to resent Spike constantly calling in a rain check, and breaks ties with him.

Spike then begins going on his rounds with Rarity, but he's so depressed over losing Gabby as a friend that his heart clearly isn't in it. Only after seeing that she's driven a wedge between Spike and Gabby does she realize how badly she's been acting. She apologizes again, although she does tone down her dramatics this time. Both Spike and Gabby accept the apology, and the three of them reconcile.