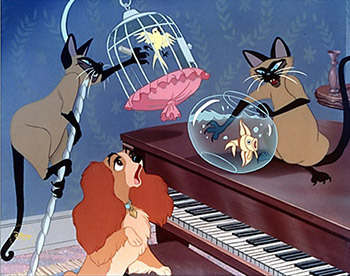 "We are Siamese if you don't please!"

You've just noticed that your pet is seemingly lonely, so what's the best thing to do? Get a new pet that might be a good friend for the current pet. However, just as soon as you leave the room, the new pet actually turns out to be very troublesome and spoiled, tearing up the rugs and the curtains, spilling milk all over the floor, and knocking over the trash.

When you come back in the room, you become surprised at the mess and become quick to blame the old pet for causing the damage. The pet tries to insist that he did not do it, but you don't listen (of course, it helps that the pet isn't usually able to talk). The old pet takes matters in his own paws to expose the new pet for the fraud that he is. Once the new pet has been exposed for what he really is, he is immediately disposed of and the old pet is forgiven.

Also, there are some variants of this trope where instead of a pet, it's when a person tries to make friends with another character who also does a lot of misdeeds to get the other in trouble.

Setting aside the anthropomorphic elements, there can be a certain amount of Truth in Television to this, as stress and pecking-order issues can cause misbehavior in both the new and existing pets unless the owners are careful about introducing the new arrival.

Compare: Bitch in Sheep's Clothing and Clear My Name.