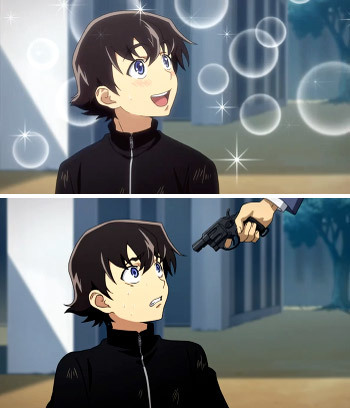 Fiction often has far extremes. They cover the gamut of emotion, from tragedy to comedy. Sometimes, these two will be so close together that they make the viewer's head spin! Done well, the contrast in moods can make each emotion all the more poignant and effective. Done poorly, the contrast can jar the reader/viewer right out of the story, often resulting in nice, juicy Narm instead.

Sometimes, Mood Whiplash can extend to entire sequels, where the original was funny but its sequel is rather dark. More often, however, a dark film will spawn a sequel that degenerates into self-parody and farce.

In episodic media, this trope will often take the form of a light-hearted stand-alone episode breaking up a darker Story Arc. If the work is a comedy and the trope is deliberately invoked, then it's being Played for Laughs.

This trope often goes hand in hand with Out-of-Genre Experience. Short-term mood whiplash may be triggered by effects such as a Quiet Cry for Help. Compare Mood Dissonance, where two events of contrasting mood play out simultaneously, Soundtrack Dissonance, the musical equivalent, and Bread, Eggs, Milk, Squick, when the whiplash happens midline. Shows that incorporate the Cerebus Rollercoaster are very prone to this. See My God, You Are Serious! for a specific version of Mood Whiplash. Mood-Swinger is when the character suffers from this trope in-universe.

Vile Villain, Saccharine Show is a very specific subtrope of this, where the main villain is far scarier than the tone of the show would usually warrant. See Knight of Cerebus for when the appearance of a Big Bad invokes this trope. Made Myself Sad is a (usually funny) subtrope. Also see Cry Laughing for a way it can be used. Gut Punch is a subtrope. Inner Thoughts, Outsider Puzzlement frequently involves this.

Ascended Fridge Horror can often be a source of this, by glossing over the dire implications of something one moment and then exploring them the next.

Not to be confused with Dastardly Whiplash, or one from Emotional Powers. If this is done in quick succession and is Played for Laughs, it's Bathos. When Played for Horror, it's Surprise Creepy. If the moment in question is a sad moment which is followed by a happier moment, that's Tear Dryer. May involve a Smash Cut.

Sometimes Truth in Television: the human body is physically made to laugh after some devastating event in order to get your bodily chemicals back to normal.

Frylock learns he's been diagnosed with cancer, so the others attempt to get him out of his slump by inviting Andrew WK to party.

Frylock learns he's been diagnosed with cancer, so the others attempt to get him out of his slump by inviting Andrew WK to party.