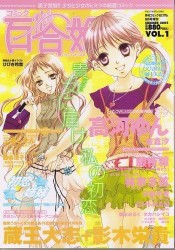 First issue of Yuri Hime
Yuri Hime (Lily Princess) started out as the Yuri anthology magazine Yuri Shimai (Lily Sisters) publishing both individual stories and serials. Yuri Shimai folded in February 2005, then was rebranded and brought back in July 2005 as Yuri Hime. The magazine started out as a Shoujo/josei magazine with about 70% female readership.
Advertisement:

Yuri Hime, and Girls Love are both published by Ichijinsha. Yuri Hime is currently being published bi-monthly.