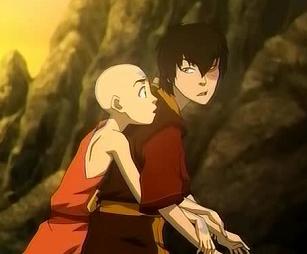 Aang prefers the Hands-On Approach
Kevin Murphy [as Zuko]: I have no time to think about girls when I'm obsessing over a 12-year-old boy. Wait. That Came Out Wrong.
—Rifftrax of the live-action movie adaptation, lampshading what little of the show's spirit it kept.
Advertisement: