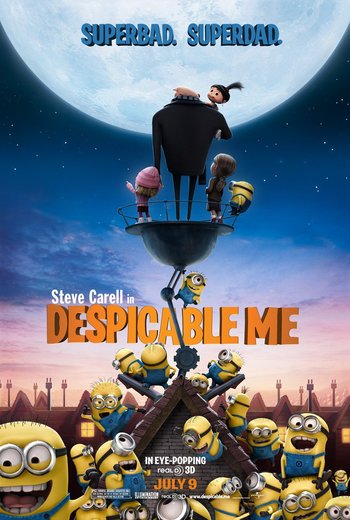 One big, bad, happy family.
"We have located a shrink ray in a secret lab, and once we take this shrink ray, we will have the capability to pull off the true crime of the century! [...] We are going to steal... pause, for effect... the moon! And once the moon is mine, the world will give me whatever I want to get it back! And I will be the greatest villain of all time!"
— Felonious Gru
Advertisement:

Universal's first in-house CGI animated feature,note they distributed two computer-animated films produced by other companies in 2008 and the first animated film from Illumination Entertainment, executive-produced by former Blue Sky Studios head Chris Meledandri. The plot revolves around a Supervillain named Felonious Gru (Steve Carell) plotting to steal the moon while he hides in his Elaborate Underground Base with his army of Minions in a suburban neighborhood.

Unfortunately, a younger villain, Vector (Jason Segel), steals the shrink ray Gru was in the middle of stealing, and he needs to get it back. That's when Gru notices how willing Vector is to let orphans selling cookies into his house and ...lightbulb! Gru proceeds to adopt the three orphans - Margo, Edith and Agnes (Miranda Cosgrove, Dana Gaier and Elsie Fisher respectively) - to carry out his Evil Plan.

Can Gru learn the importance of family and how to be a good dad?

The film was a surprisingly huge hit. Its success convinced Universal, who for years had been reluctant to become a major challenger against Disney, Pixar and DreamWorks Animation, that the time had come for another player in feature animation, and sure enough, Illumination Entertainment became their main animation powerhouse. The string of future projects are due to the successes of these films.

The Film was followed by:

Despicable Me contains examples of:

open/close all folders
Series-wide
A-E
F-J
K-O
P-T
U-Z
♫ I'm having a bad, bad day.
It's about time that I get my way.
Steamrollin' whatever I see.
Oh, despicable me! ♫
Feedback