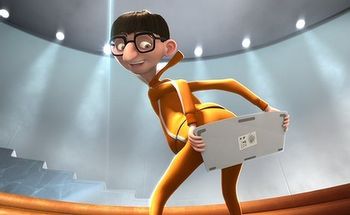 Anybody got any hand sanitizer?
Advertisement:

Gru: But that's not all. We stole the Statue of Liberty!
(Minions all happily cheer)
Gru: The small one from Las Vegas.
Minions: Awwwww.
Gru: And I won't even mention the Eiffel Tower! (A Minion wheels in a smaller Eiffel Tower) Also Vegas.
Gru: Hey, Dave? LISTEN UP PLEASE!