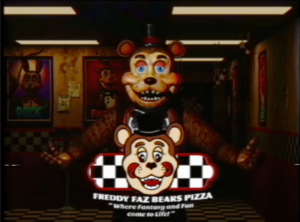 READY FOR A RE-RUN
Advertisement:

In 2019, Squimpus McGrimpus created the Five Nights at Freddy's VHS series, retelling the story of the first four games in the form of Analog Horror-style lost VHS tapes. Two years later, another channel known as Battington

(of Harmony & Horror fame, which itself was inspired by FNAF) began remaking the videos with a twist, announced here

While the first video was simply a 1:1 remake of "Fazbear Entertainment Video Manual" using custom models inspired by Chuck E. Cheese's (in)famous animatronics (and a slight Jump Scare at the end), future installments went in a different, more original direction on the advice of Squimpus themselves, resulting in hefty doses of Adaptational Expansion.

In April 2022, a joke Battington made involving the creator of The Walten Files that was perceived to be in poor taste led to Squimpus McGrimpus, whom at first approved of the remakes, explicitly forbidding

in September of the same year that the series would continue via videos with an original plot.

The playlist for the series can be found here

Tropes found in the remake: