Visual Novel / Shall We Date?: Obey Me! 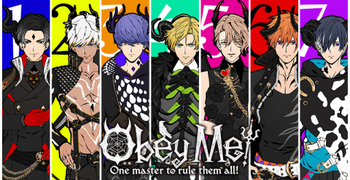 The seven brothers that you meet in the Devildom. note  From left to right: Lucifer, Mammon, Leviathan, Satan, Asmodeus, Beelzebub, and Belphegor.

Obey Me! One Master to Rule Them All is a game in NTT Solmare's Shall We Date? series of otome games.

The game opens with the main character hearing a voice calling to them in their dreams, asking for their help because they're held prisoner. When they awake, they found themself in a courtroom-like space, where they are introduced to Lord Diavolo, the next-in-line Demon King of the Devildom, the land of demons. He tells them that they were one of two humans chosen for an exchange program to foster a better understanding between demons, humans, and angels. He then introduces them to the head of Student Council at the demon's academy they'll be attending, Lucifer, who informs them that they will be living in the Devildom for a year as an exchange student at RAD. He appoints his brother Mammon as their guardian, and they move into the dorm where Lucifer and his six brothers live. From there, the protagonist must make pacts with each brother, a bond where they're able to command the demons to do as they say, in order to discover the secrets of the seven highest-ranked demons of the Devildom.

Obey Me! is less of a traditional otome Visual Novel and more of a cross between this and a card-based RPG, where tasks are completed by obtaining and leveling up cards from a gacha system called Nightmare. Story chapters are interspersed with "tasks" that the protagonist must complete during their stay. Said tasks are actually dance battles, where characters obtained through gacha are pitted against other demons in order to rank up and unlock further story chapters.

It was released with an English localization on December 12th, 2019 for Android

The game's opening animation can be found here

Shall We Date?: Obey Me! includes the following tropes:

Alternative Title(s): Shall We Date Obey Me