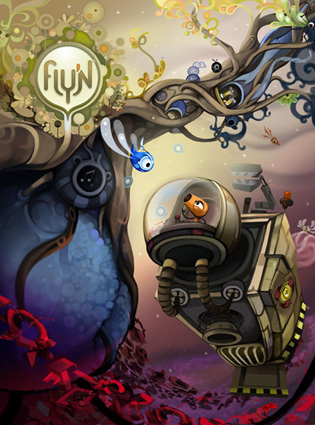 In the world of Helycia, the World Trees' sap is being stolen by the cosmic trash collector Dyer and their branches polluted by trash ejected from his cosmic trash can, Megabin. In response, the World Trees created four buds in order to recover the tree sap and put an end to Dyer's mischief.

Fly'N is a puzzle platformer by Ankama Animation that was released in 2012 after being Greenlit on Steam. The game shares elements of its art style with Rayman and Botanicula. You play as one of four buds created from a World Tree, each of whom possesses a different ability that allows the player to surmount obstacles in a series of levels, collecting pollen and Helys, which are lighter-than-air balls of energy. Some levels require the player to combine the abilities of different Buds, which is done by spawning a different type of bud at a checkpoint. At the end of each level, you are given a score based on how many collectibles you got, how much time it took to complete the level, and how many times you died.

All four of the Buds can use double-jumping and gliding to traverse the levels. They can also switch between different modes of vision: Innate, where the colors are vivid, the platforms are solid and the clouds are transparent, and Subtle, where the music becomes more bass-heavy, the colors are inverted, and the Buds can stand on wisps of cloud and pass through platforms that were otherwise solid. Subtle vision also allows them to travel along wind streams.

Flyn - The first of the buds that the player controls. Flyn can use his song to infuse objects with balls of energy called Helys, which makes them lighter than air. This ability is used to clear a path through the levels by repairing the damage done by Dyer spreading garbage over the world tree. Flyn's song is also used to 'wake up' friendly NPCs who are hidden around the levels, which then reveal more of the pollen scattered throughout each level.

Lyft - Lyft can reach areas far up sheer cliff faces by sticking to walls and crawling along them.

Ywok - The damage sponge. Once inflated, Ywok bounces off any surface, destroys breakable blocks on contact and may touch otherwise lethal hazards.

Nyls - Nyls's part of the World Tree is the last to be explored. Nyls' can dash through the air in the form of a rocket up to three times (though the range is short) and can charge through breakable blocks. Because each rocket may be lined up and fired in any direction, he is often required for traversing a long series of obstacles.

It is also VERY pretty.