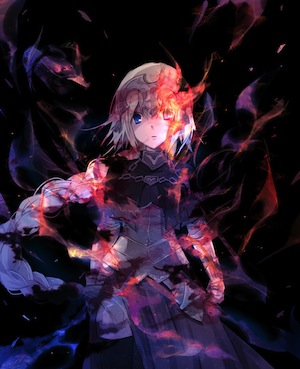 "Archwood will burn..."
The Holy Grail War. A battle between the greatest opponents, meant only to find who is worthy enough to possess the legendary, omnipotent wish granting device. The rules, this time, were different.
"I am the Overseer, Jeanne d'Arc, the class of Ruler. Don't worry. I will handle anything if it gets out of control."
Advertisement:

Years have passed since Lord El Melloi II dismantled the Greater Grail of Fuyuki City. The system was completely torn apart, the pieces scattered across the world on the winds, and the practice forbidden. It was thought the barbaric tradition of the Holy Grail War had finally been put to rest. It would have been nice if that was the truth.

Archwood City, USA. A bustling island metropolis, located somewhere along the coast of California. Something here happened recently. An anomaly. Something that never should have occurred. At least not on its own. A new Holy Grail War has begun spontaneously, with no outside interference. What's worse, the system is irregular. Servants can now be summoned in numbers exceeding the original seven. Normal people and magi alike are being snatched off the street to fill the Grail's need for new Masters. A Servant, Jeanne d'Arc of the Ruler class, has been assigned the role of Overseer, with no prior appointment from the Church. And what's most alarming are the rumors. Rumors circulating that the Grail the Ruler speaks of may in fact be the genuine article.

There's a storm brewing over Archwood City. It will only be by good fortune that anyone is left alive when it passes.

The forum RP meant to succeed the wildly popular Fate/Festival of Epics, Fate oath/alternative is an ambitious project headed by RagnaTheSaviour, and co-GMed by KSPAM and the former head GM of Festival of Epics, daltar. The RP proved to be just as successful as its predecessor, signups filling up quickly. Within two months, the RP had already begun, and reached over 1000 posts.

The RP moves quickly, and new Servants and Masters are always welcomed. Canon Servants are, barring a few notable exceptions, allowed, although OCs are preferred for both Masters and Servants. You can find the signups here.

For any questions, the discussion

is open and available to all who are considering/currently participating.