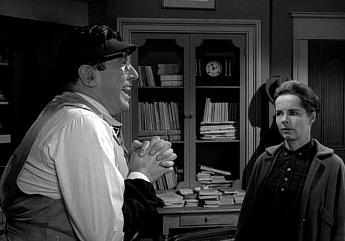 Oliver's Evil Laugh unnerves Mrs. Lucas.
Rod Serling: That's Oliver Crangle, a dealer in petulance and poison. He's rather arbitrarily chosen four o'clock as his personal Götterdämmerung and we are about to watch the metamorphosis of a twisted fanatic, poisoned by the gangrene of prejudice, to the status of avenging angel, upright and omniscient, dedicated and fearsome. Whatever your clocks say, it's four o'clock — and wherever you are, it happens to be the Twilight Zone.

Oliver Crangle (Theodore Bikel) is a fanatic who maintains records of people he deems evil, calling and writing their employers to alert them of their evil acts, demand their immediate firing and threaten to involve higher authorities if they don't comply. Unsatisfied with the results of his anonymous threats, he searches for a more effective way to eliminate all evil from the world. When Mrs. Lucas (Phyllis Love), the wife of one of his victimsnote her husband is a hospital intern who lost a patient; Oliver thinks it was murder, futilely pleads with him to leave her husband alone, Oliver is inspired when he makes a chance remark about evil people being "little bugs" and "bacteria"; he settles on the idea of shrinking the "evil" people to two feet tall. He cackles at the idea of that plan. Mrs. Lucas realizes she can't reason with him and leaves.

Oliver calls various government agencies to warn them, and FBI Agent Hall (Linden Chiles) is sent to investigate. Crangle tells him that he has finally devised a plan to shrink every "evil" person down to two feet tall at 4:00 that afternoon through sheer force of will. Hall dismisses him as a crank and recommends psychiatric help. Angered, Crangle warns Hall that he's one of the evil people who will become two feet tall, but Hall ignores him and leaves.

When 4:00 rolls around, Crangle's plan apparently works! However, Oliver is in no mood to celebrate, because he himself has been shrunk to two feet tall. His parrot, Pete, calls him a "nut" for his actions.

Rod Serling: At four o'clock, an evil man made his bed and lay in it, a pot called a kettle black, a stone-thrower broke the windows of his glass house. You look for this one under 'F' for fanatic and 'J' for justice in the Twilight Zone.