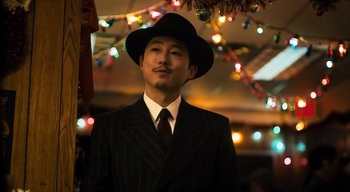 "You're throwing a party. I'm dressed for the best party."
Jordan Peele: Meet Sergeant Yuka Mongoyak, a woman with a knack for detecting the most subtle of mistruths. On this night, a night of the most powerful of myths, that skill will be tested like never before. She's about to learn that the truth can take many different forms, depending on how you look at it. Because tonight, Sergeant Yuka's vantage point is at the very heart of The Twilight Zone.
Advertisement:

It's Christmas Eve in a small Alaskan police station, and a person named "A. Traveler" (Steven Yeun) mysteriously appears in a jail cell. The only one to question the man's sudden appearance is Sergeant Yuka Mongoyak (Marika Sila) but Captain Pendleton (Greg Kinnear) is amicable to the visitor. However, A. Traveler starts to reveal secrets he knows about the area and the people within.

Jordan Peele: The most dangerous lies come in the form of beautifully wrapped gifts. On this evening, Sergeant Yuka discovered that there's no difference between myth and mistruth. She unwrapped her fateful present far too late on this dark and silent night in The Twilight Zone.