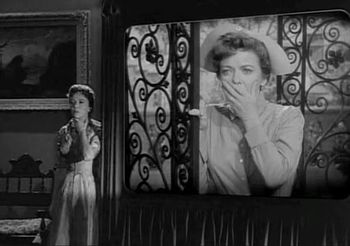 Aging film star Barbara Jean Trenton (Ida Lupino) secludes herself in her private screening room, where she reminisces about her past by watching her old films. In an attempt to bring her out into the real world, her agent Danny Weiss (Martin Balsam) arranges a part for her in a new movie and brings a former leading man—now also older, many years retired from acting, and managing a chain of grocery stores—to visit her. This horrifies Barbara Jean and only drives her further into seclusion. Then one day, Barbara Jean's maid finds the screening room empty—and is shocked by what she sees on the screen. Danny comes over and sees on the screen the living room of the house, filled with movie stars and Barbara Jean as they appeared in the old films. He pleads with her to come back, but she throws her scarf toward the camera and departs just before the film ends. In the living room, Danny finds Barbara Jean's scarf. "To wishes, Barbie," he says wistfully, "to the ones that come true..."

Advertisement:
Rod Serling: To the wishes that come true, to the strange, mystic strength of the human animal, who can take a wishful dream and give it a dimension of its own. To Barbara Jean Trenton, movie queen of another era, who has changed the blank tomb of an empty projection screen into a private world. It can happen — in the Twilight Zone.