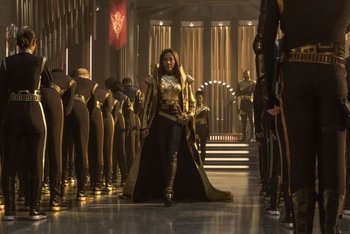 All hail Her Most Imperial Majesty, Mother of the Fatherland, Overlord of Vulcan, Dominus of Qo'noS, Regina Andor, all hail the Emperor Philippa Georgiou Augustus Iaponius Centarius!

Burnham meets with Emperor Georgiou, while Stamets and his alternate self try to escape the mycelial network.