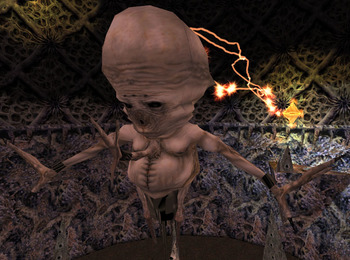 "FREEEEEEEEEEEMAAAAAAAAAAAANNNNNN....."
Valve Software's attempt at an FPS narrative, namely replacing the generic A Space Marine Is You (battling for the fate of the universe, natch) with a Badass Bookworm who seemed to be stuck in the middle of a bad situation, made players much more sensitive to the atmosphere than before. And with each release, Valve has been making atmosphere an increasingly bigger part of the experience.