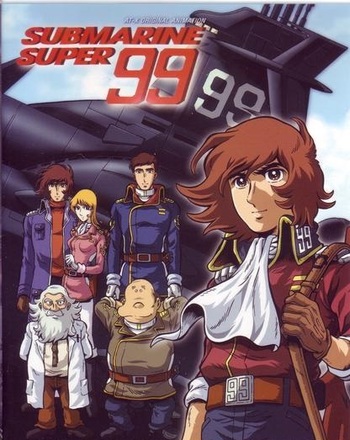 "Embark to A New Ocean!" note Pictured to the right on the forefront: Susumu Oki. On the background, clockwise from the top-left: Gorou Oki, Miyuki Moriki, Captain Kizuku Ooyama, Torakichi Tanuki and Dr. Juzou Oki
Advertisement:

Submarine Super 99 (Japanese: 潜水艦スーパー99 Hepburn: Sensuikan Sūpā Nain Nain) is a manga series written and illustrated by Leiji Matsumoto. Originally written during 1970-1972, it spawned only two volumes, and is one of the creator's lesser known works, as well as completely unrelated to his bigger universe. It received an Animated Adaptation that aired on AT-X in 2003.

It is the year 20XX, and Earth's ocean is taken over by a mysterious "Ocean Empire" that carries out several attacks on vessels all over the world. The empire's military commander in chief, Hell Deathbird, demands that all shipping request his permission for sailing. Japanese forces send marine biologist Dr. Juzou Oki and his grandson Gorou to investigate the mysterious threat. They set off in an exploration submarine to investigate the attacks in the Japanese Trench; soon later, their vessel is attacked by a mysterious submarine hiding in the Trench and contact with them is lost.

Before they left, however, Gorou gave his younger brother, Susumu, a rifle modified from the Type 99 rifle of the World War II era, and Juzou also entrusts him the a key bearing a "99" mark to his secret lab. Inside, Susumu discovers an advanced battle submarine, and inside it a note from his grandfather to memorize the submarine's working manual to help its crew with any technical problems. Commanded by Captain Kizuku Ooyama, the Super 99 will embark in a mission to search for Dr. Oki and Gorou, as well as unraveling the mystery behind the Ocean Empire and defeat them.