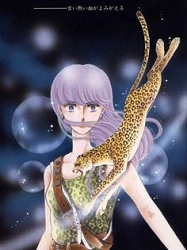 Purple Eyes in the Dark (Yami no Purple Eyes) is a manga created by Chie Shinohara.

Rinko Ozaki is a regular highschool student, except that she has a faint mark on her lower left arm and it has been getting darker lately. However, strange things begin to happen. Rinko becomes entranced by the smell of blood and she loses consciousness, only to find herself naked and in places she doesn't know, barely remembering anything.

Then her teacher Sonehara tells her about the research she has taken over from her deceased father: humans who have the ability to transform into beasts. And the research says that people who have marks like Rinko's are the ones who possess this ability. Intent on proving her late father's research, Sonehara's attempts to encage Rinko and experiment on her beast form, but Rinko begins to run away.

The second half of the manga occurs years later, when Rinko's daughter, Mai, becomes the next target. Is it still Sonehara who is after her? And what has become of Rinko?

Purple Eyes in the Dark contains examples of: