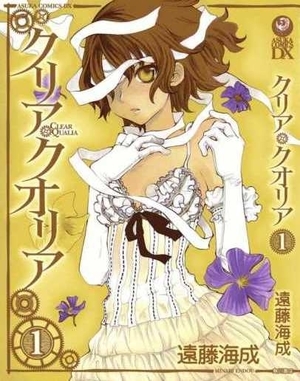 Clear Qualia (Kuria Kuoria in Japanese) is a manga by Minari Endou, the same mangaka who brought us Maria†Holic and Dazzle. It ran in Monthly Asuka from 2006 to 2007.

In a distant Island, people suffer from a strange disease called "Pinocchio". This disease causes the patient's limbs to rot, and before long, leads to death. But victims can have the disease cured by using artificial limbs or "exchanging" limbs of people with special antibodies. These people with the antibodies, who only exist one in 10,000, are called "Donors", and their bodies considered national treasures. One day, Dorothy, a Donor, exchanges her precious right eye for a male Plastica, a robot servant, who was about to get thrown away. Their meeting begins a story of a strange woman and her strange Plastica.