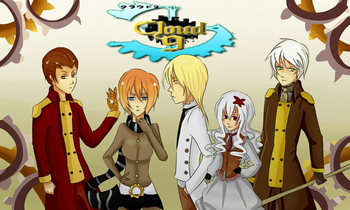 Cloud9 is a Audio-Manga written by Caleb Robinson-Cook in 2011. It follows the story of Kibiko Sorayama, an Action Girl whose one and only goal is to get into the Detective Agency on Cloud9 - the ninth of twelve chunks of countries floating in the sky after the world has been lost to the biologically-fought World War III. Her rival comes in the form of Dokei Kanegami, an Anti-Hero who wants to get into the Detective Agency for his own unknown reasons...

This original webseries provides examples of: