But Wait, There's More!
aka: ptitle438icnhs 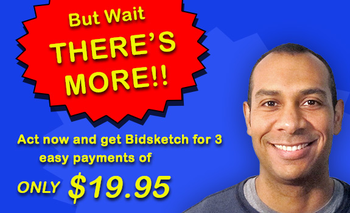 (When reading this entry, please instruct the voice in your head to use a tone of rapid, breathless excitement to properly convey the importance and amazement involved, a la Billy Mays.)

A common phrase often heard in infomercials that resemble a high pressure sales pitch! After demonstrating why the product is the best thing ever, how it lets people who don't know how to use a strainer to drain pasta without burning themselves and does your taxes for you! A price is set! But wait! There's more! In addition to the product, you can get more of them, in a handy travel size, along with this other product that helps you sort your drawers and store food, and costs far more than a couple of mason jars or some of those Glad disposable tupperware things!

All this for only 69.99, or Four Equal Payments of 49.99! Operators Are Standing By! But only if you act now! Don't think, it's a great deal! Buy now! Offer Void In Nebraska.

(Your mental voice may calm down now, if it wants to.)

A stock phrase uttered by infomercial hosts after telling you all about the great product they're hawking. They proceed to sweeten the deal by adding a few more things, or refills, or another product that's not selling so well on its own, or "double your order" when that's how much they intended to sell for the price in the first place. But only if you act now! Now! Now!

There's even a bit of unintended humor to the phrase, since it can give the impression that the ad itself knew you were about to change the channel on it.

The phrase has become so associated with infomercials that it's hard to believe that it's Older Than Steam, but it's one of The Oldest Tricks in the Book. The only reason that we can't date it back before the 1400s is that we simply don't know a lot about common life before the Renaissance - until then, nobody wrote down what the average person said or did (or if they did we don't know it). Suffice it to say that archaeologists wouldn't be at all surprised to find the Latin equivalent of "But wait! There's more!" scrawled on the wall of a Pompeii shop.