Literature / The Executioner and Her Way of Life

Due to the nature of the story, it is recommended that you view at least the first episode/chapter of The Executioner and Her Way Of Life before continuing to read on. Unmarked spoilers are ahead. 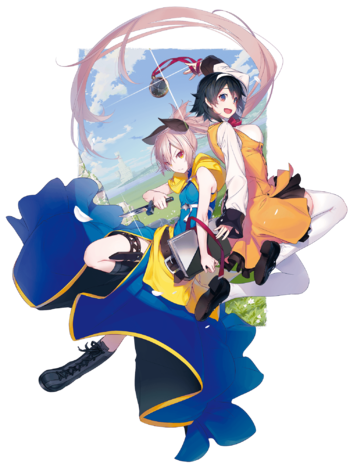 The Executioner and her Target go on a journey together. note Menou and Akari Tokitou.
"My name is Menou. I'm a pure, just, and strong priestess."
— Menou
Advertisement:

There is a world much like our own in which many humans have great magical potential. However, there also exists those that have a far greater potential than the average person, known as "Lost Ones" or "Otherworlders." They are people who come from a world known as "Japan" that have been summoned into this world through a ritual. They are known for possessing such great magical potential that they have been seen as causes of great calamities. As a result, the Church has deemed it a Necessary Evil to execute them before they can become a threat.

Menou is one of these executioners. After executing one Otherworld, she learns of the existence of another "Lost One" named Akari who was summoned at the same time. When she attempts to fulfill her duties, she learns firsthand that Akari's abilities make it impossible for Menou to kill her without help. After tricking Akari into believing she is her ally, they go off on a journey while Menou attempts to eliminate Akari permanently. However, will her feelings regarding this "duty" remain the same, or will they begin to waver over time?

The Executioner and Her Way of Life (Shokei Shōjo no Virgin Road in Japanese, literally The Executioner Girl's Virgin Road) is an ongoing Isekai yuri Light Novel series written by Mato Sato and illustrated by Nilitsu, which began publication under the GA Bunko imprint in 2019. As of April 2022, seven volumes have been released in Japan. It is licensed by Yen Press, who began releasing the series in the West in March 2021. It has an ongoing manga adaptation that began monthly serialization in Young Gangan in June 2020, which was also licensed by Yen Press. It was announced during January 2021 that it would receive an anime adaptation that began airing on April 1st, 2022 and finished its run on June 17th, 2022 with a total of twelve episodes. A dub released on HiDive on May 20, 2022.

Having discovered what his power is in this new world, Mitsuki prepares to hone his skills and learn more about himself with his new companion the Priestess Menou.

Alternative Title(s): The Executioner And Her Way Of Life

Having discovered what his power is in this new world, Mitsuki prepares to hone his skills and learn more about himself with his new companion the Priestess Menou.