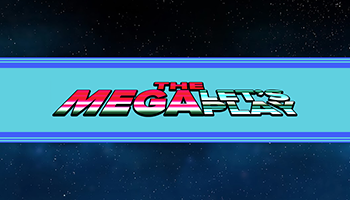 Once again, back is the incredible!
"This is the Wall. Every Mega Man game released in the US, and then some. And we're gonna play them all."
— Rick & John, announcing The Mega Let's Play
Advertisement:

The younger, bigger brother of 2013's The D-Pad: The Legendary Let's Play. Not satisfied with playing a dozen or two games and being done with it, The D-Pad opted to try something different as a followup to the first Franchise Play experiment, by declaring that they would play the entire Mega Man franchise, rather than just the "core series".

On December 17, 2014 (while The Legendary Let's Play was wrapping up), The D-Pad released an announcement teaser

for the series, showing off the 64 games they intend to tackle (though some previously missed games have since been added to the mix). The series began with a Capcom retrospective

on January 19, 2015, and has released daily video content since then, including standard Let's Play videos, an opening and closing analysis of each game they play, and even reviews of the various televised Mega Man media in a crossover with Seriesly.

Due to the scope of the project and the limitations of YouTube playlist sizes, the series is split into several parts on YouTube. The overall block of videos is viewable in a special dashboard playlist

, and more links are listed on the series' recap page.