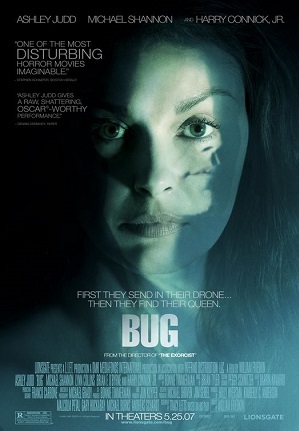 (For other uses of the term "Bug", see the disambiguation page)

Bug is a 2006 Psychological Horror/Tragedy film based on the 1996 play by Tracy Letts (who also wrote the film adaptation), directed by William Friedkin and starring Ashley Judd and Michael Shannon.

It centers around Agnes, an extremely lonely woman living in an Oklahoma motel room after the breakup of her marriage. A friend introduces her to Peter, who is similarly lonely, and the two start enjoying each other's company. The two open up to each other and then...well...

The film and play presents us an intriguing example of folie à deux.

Not to be confused with the 1975 William Castle-produced film about mutant cockroaches.