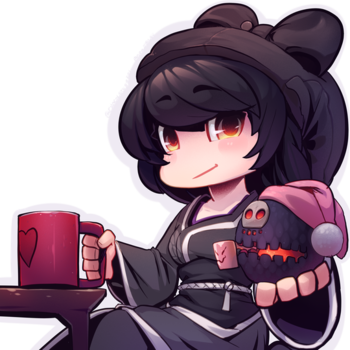 A Heartwarming story of friendship between a girl and an eldritch abomination.
Her feet touched the bottom and she marveled at the abyss around her.
There was nothing. It was dark, and lonely... but peaceful, and unchanging.
Had anyone ever seen the world from these twin perspectives? High above, and far below?
Everything seemed unimportant from both.
She took a step, and then another.
As she did, her light crept upon something.
A shell?
An enormous shell?
What could it be?
An eye opened.
It stared at her.
It stared into her.
— x50413, Devourer of Worlds

is a crossover between RWBY and Chrono Trigger. It has a prologue starting before the events of canon and then picks up during the events of the Black Trailer of RWBY.

The story is a narrative driven vote-based choose-you-own-adventure (or [[Roleplay Quest]]) format that relies on audience participation and votes to determine what the actions of the viewpoint character, usually the Lavos Spawn, will do next. As a world ending eldritch abomination whose existence will lead to an eventual extinction event on the planet, the majority of its actions are focused on interacting with an Arbiter, a mortal in possession of the Frozen Flame, or dreaming about people, places, and events from the Chrono Trigger video game.

Devourer of Worlds dreams of the following tropes...