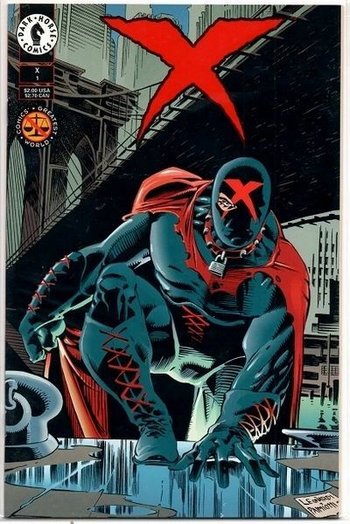 One of the more popular series of Dark Horse Comics' short-lived superhero universe Comics' Greatest World, which showcased different types of superheroes throughout its four environments. X represented the '90s Anti-Hero, who was determined to rid the city of Arcadia of the rampant crime and corruption that plagued it and was willing to kill anyone who stood in his way. A single diagonal slash across your face meant that you were warned and you'd better not break his rules again; if he completed the X, he killed you. No exceptions.

His first story was in Dark Horse Comics #8-10 back in 1992, which was later reprinted as X: One Shot to the Head. He started the Comics' Greatest World weekly 16-issue launch in 1993, where he featured prominently in all four Arcadia issues. February 1994 saw the first issue of his ongoing series, which lasted 25 issues, the last of which was published in April 1996.

Dark Horse rebooted the series in 2013, along with Ghost and a few other CGW heroes, as part of its Project Black Sky imprint. The reboot was reasonably successful, lasting 25 issues.