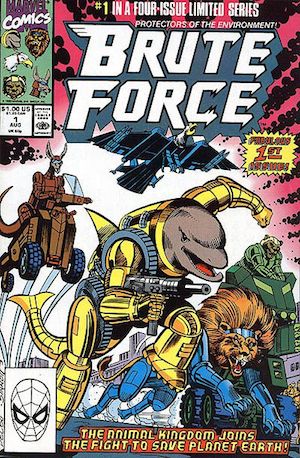 Has Science Gone Too Far?
"Protectors of the Environment!"
Advertisement:

Brute Force is a short lived (4 issues, August-November, 1990) Marvel Comics creation, originally by Charles Viola, written by Simon Furman, and illustrated by Jose Delbo. It stars a team of animal cyborgs known as "Brute Force", later opposed by another team of cyborg animals known as "Heavy Metal". It existed as a shameless attempt to sell toys (without a toyline, Marvel was allegedly expecting toy companies to buy the toy rights from them).

The book was meant to be part of Marvel's Star Comics line of kid's comics, going as far as having ads for that line in the issues instead of the mainline Marvel books.

The team made a return in the Deadpool Bi-Annual, going up against Deadpool, and have made a few appearances since then, becoming a minor but present part of the Marvel Universe.

Not to be confused with the Xbox game or the arcade game with the same name.

For a similar concept (cyborg animals with weapons and increased intellect), but with more pathos, reality, and without Rule of Cool, check out We3.

Brute Force has examples of: