Tropes as a duo
The protagonists of Spooky Month, these jolly children are the best of friends who share the same obsession with Halloween. They roam their town to make the most out of every Spooky Month, running into all sorts of strange people and creatures on their nights out.
Advertisement:
Skid 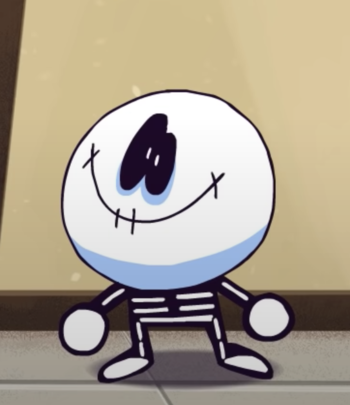 Voiced by: Sr. Pelo
A young boy in a skeleton costume, Skid lives with his mother Lila in a suburban neighborhood, preparing to celebrate Spooky Month (which can be any month they decide) with his best friend as soon as nightfall comes.
Pump 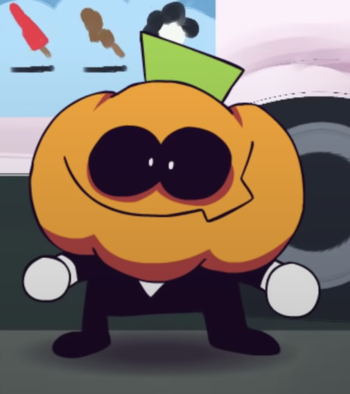 Voiced by: Sr. Pelo
Skid's best friend in the neighborhood, Pump shares the same love for Halloween and dresses himself up with a suit and a pumpkin mask. Not much is known about him besides his close bond to Skid's family. 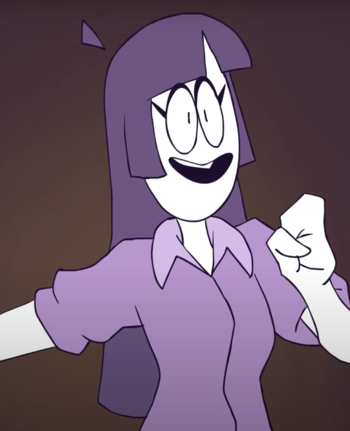 Voiced by: Sr. Pelo ("It's spooky month"), Elsie Lovelock ("The Stars" onwards)
Skid's mother, who always seems to find herself in mortal danger during the nights of Spooky Month. In any case she's nothing but loving and supportive of Skid and his favorite holiday.
Skid's dad 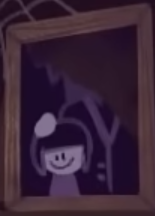 Lila's ex-husband. No one really knows or cares about what happened to him.
Advertisement: 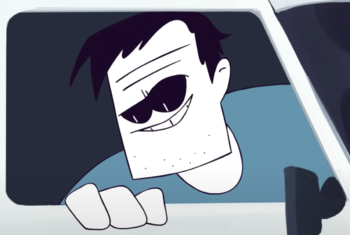 Hey kids... want some candy?
Voiced by: Sr. Pelo
A shady man always seen in his white van, Frank makes a living out of abducting children off the street, drugging them up to knock them out and putting out a ransom for the parents to cough up if they want their kid back. He's a good friend of Skid and Pump.
The OOGA BOOGA Witch 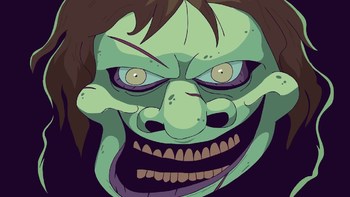 OOGA BOOGA!
Voiced by: Sr. Pelo
A loud, invasive and terrifying(?) hag whose appearance is always followed by a horrifying(?) Jump Scare that is in no way old and overus-OOGA BOOGA!
Kevin 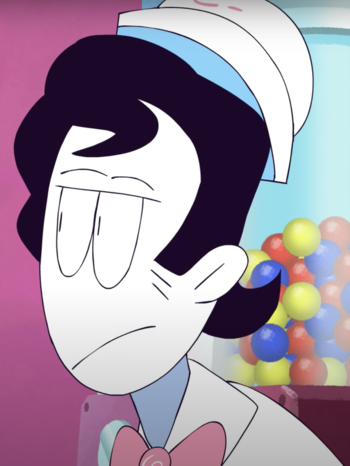 "What do you kids want?"
Voiced by: EllusiveVA
An irritable cashier at the candy store, Skid and Pump visit him often to pick up some candy for their Spooky Months, with all the trouble that entails.
The Hatzgang (Roy, Ross and Robert) 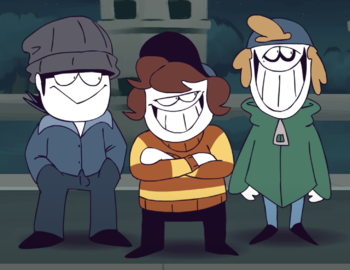 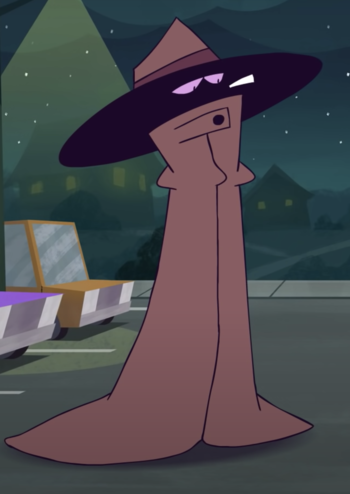 Would you kids help a poor, lonely, candy dealer?
Voiced by: Coffinjockey
A tall, dark and foreboding man in an all-concealing trench coat, big obscuring hat and an ever-present cigarette inside his shadowy silhouette. He gets the boys to help him deliver some sugar to Kevin.
The Stranger 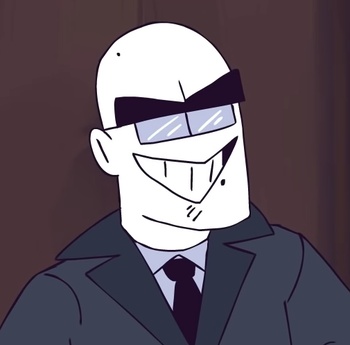 Now it's time to get my treats.
Voiced by: Sr. Pelo
A creep who lurks in the house on the hilltop.
Sheriff John and Deputy Jack 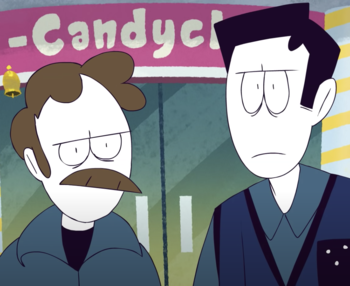 Voiced by: Coffinjockey (John) and ElusiveVA (Jack)
John is the older town sheriff, and Jack is his young deputy. The two patrol around town trying to put a stop to strange occurrences and criminal activity with mixed results.
The Thieves 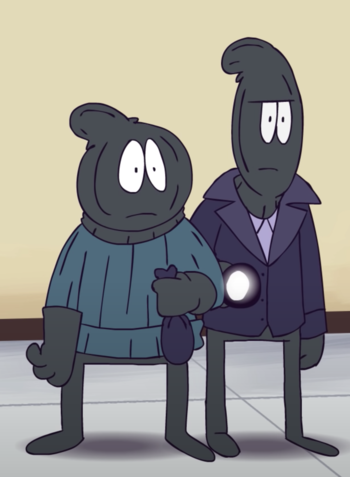 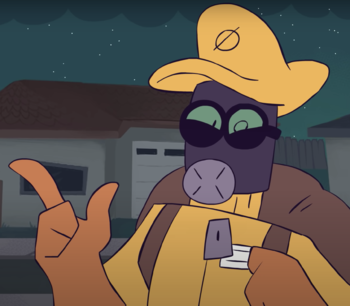 I love cats! I'll hug 'em until their br-r-r-rains are out!
Voiced by: Metamaniac
A pest exterminator who likes killing rats, bats, cats and everything fast, who Lila brought over to get rid of a rat stuck in the attic. He's very much out of his league with who's he really up against. 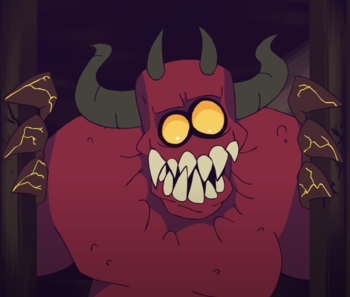 H̴̢̓e̷͎̒y̶͎͐!̴̠͝ ̵̦̔H̷͕͆E̴͎̓Y̸̱͛ ̸̻̂Ḱ̷͙I̶̹̋D̴̠̋!̸̱͌ ̴̉G̸̙͌̓ȩ̵̦͛̓t̸̘̎ ̷͉͙̏̏m̸̙͚̌ē̷̺ͅ ̷̬͠o̴̜͑͗ṵ̷̍̈́ẗ̴̢t̴̞̄ả̵͎̇ ̴̘̯̿ḥ̵͉͐̕è̸̡r̵̯͕͂ẻ̵̗͎͑!̴̯̗̃
Voiced by: Sr. Pelo
A demon Skid and Pump summoned on a whim when they went to make a prank call, getting him (or half of him) to appear in the attic for Spooky Month out of an Ouji board. He hasn't been able to do much for the past two years afterwards.
The Eyes of the Universe 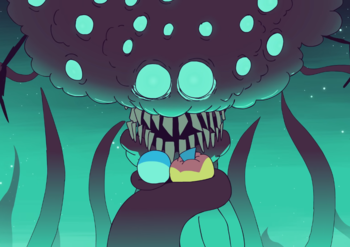 I AM THE EYES OF THE UNIVERSE, AND I WILL SHOW YOU THE END...
Voiced by: Sr. Pelo
A multi-tentacled and multi-eyed monstrosity that dwells underneath a house on top of a hill, who the kids meet after entering the manor looking for a Spooky party. The three quickly become good friends.
Mr. Clown 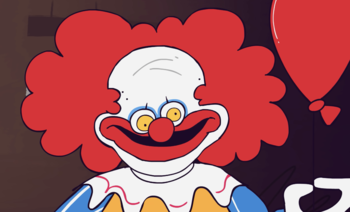 Eeee-HEHHEH-HEHHEH-HEH!
Voiced by: Sr. Pelo
A jolly clown who loves laughing, telling jokes and beating kids to death, Mr. Clown may seem fun to be around but there's definitely something off about him.