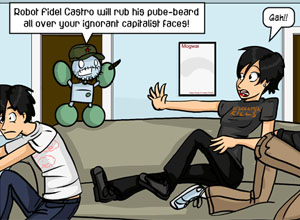 ("QC") is a long running Slice of Life webcomic with a strong SF theme by Jeph Jacques.

The comic has changed direction a few times over the years, as Jacques has acknowledged.

Will They or Won't They? (strips 0-500) Marten Reed, an under-employed and unhappy indie-rock fan, lives in Northampton, Massachusetts with an adorably sociopathic little robot. He runs into a girl at a bar, Faye Whitaker, a barista who's just moved from Savannah and needs a friend, but adamantly no more than a friend. She then accidentally burns down her apartment building while making toast and needs a place to live—namely, Marten's couch. Before long, he meets Faye's sultry, gothy boss Dora Bianchi, and they have fun, hang out, and joke around.

My Post-Singularity Life (strips 1801-3900) Dora and Marten break up, Faye is forced to leave the coffee shop, and the comic shifts focus to relations between the humans and the AI characters. Faye becomes close to an especially strong, emotionally damaged combat AI called Bubbles.

QC updates every weekday, with remarkable consistency considering that Jacques often works without a buffer. It is approaching 5000 comics over 19 years. Six print collections are currently out, featuring re-lettered and sometimes re-drawn (as the art has gotten remarkably better over time) versions of the first arcs.

Loosely connected to Diesel Sweeties by way of Faye's sister Amanda's brief fling with Li'l Sis and a couple of maybe-canonnote Jeph Jacques refused to say whether they were canon or not, explicitly messing with readers. guest strips by Randy Milholland. In addition, Shelly Winters and Amy Chilton have been spotted on holiday in Northampton

as well. Also, the A.I.s may have something to do with it, somewhere. Some occasional appearances of the cast in Shortpacked! also occur.

Jeph debuted a new comic, Alice Grove, on September 25th 2014, which was sometimes advertised under the QC strips; it ended in 2017. During October and November of 2015 he also did a comic called DORD which seems to have been abandoned.