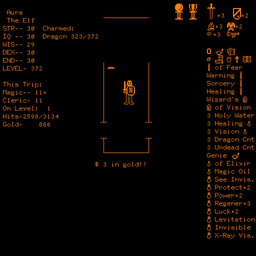 "A great game gives the players the freedom to make a vast number of choices, some of which are more beneficial than others, and some of which are disastrous, and lets them figure out which is which."
— Dirk Pellet, "Interview with the creators of dnd (PLATO)

dnd is one of the first Dungeon Crawling video games, written in 1974-75 by Gary Whisenhunt and Ray Wood for the PLATO Network and based, as its title says, on Dungeons & Dragons. The game was updated and expanded for the several years afters it publication by the original creators, as well as enthusiasts like Dirk and Flint Pellet. It was the first video game to use bosses as well as the Ur-Example of the genre that would later be known as Roguelikes.

You create a character per the very first ruleset of D&D, by rolling the dice on stats and choosing a class. Then you enter the Whisenwood Dungeon in search of Plunder and the Orb.

Being the PLATO Network, the game has graphics, and uses a Three-Quarters View similar to the dungeons of The Legend of Zelda, with the walls in top view, and your character in front view. You explore the dungeon, fighting monsters and collecting treasure.

You can leave the dungeon to rest, and use your treasure to buy items from a weapons shop and a magic shop. On your way back in, the teleporters let you skip completed levels.

At the end of the last level is the Final Boss, the Golden Dragon, who guards the Orb.

Later versions added more dungeons, a Grail to collect in addition to the Orb, and more monsters and items.