The Order of the Stick fanfic: "Bolster Undead"

It's several nights since the Mechane set off. Durkon is sitting cross-legged on the floor of a darkened cabin, his hands raised in prayer, as he has been every night of the trip. He's grimacing.

THOR, DAMN YE! ANSWER ME! Ye hammer-addled bastard, ye've never bin there when it were important. I need yer guidance now, more than ever. Any time I've been in doubt, me faith in ye has seen me through. I've dedicated me life ta yer service, and now look at me!

I… I died, fightin' that snake, an' I was s'posed ta wake up in yer halls, but instead I woke up as this monstrosity. Where's me reward, eh? Me whole life, away from me family on the say-so o' some priest who said I had some higher callin'... and not only was tha' a lie, so was yer afterlife. Bastard. Ye owe me! I was LOY-

A VOICE: [cutting in]

He won't answer you, child. Thor has turned his back on you. What you are now… he has no time for your kind. In truth — you disgust him.

DURKON: [Anger becomes suspicion. A soft yellow light plays across his face, and he squints into it.]

Someone with a place for you. You served Thor loyally, and died bravely in his name… and yet you are not dead, and Thor will not take you.

Like all my servants, left out in the cold and darkness after leading good and honourable lives, just because Thor wants his club of “heroes”. I can lead you home, Durkon.

A sickness is inside you… but such a glorious sickness. So many of my servants are feeble, in pain, dying. You are strong, vital.

You shall be the avatar of my will, and you shall earn the afterlife you deserve. Serve me, and before you die your true death, I promise you will see your homeland.

Home… it's all I… but what would ye want of me? Just because I've got this "sickness", I'll nae let it change who I am. Me friends need me — I'll never betray thar trust.

HEL: [her face has changed; now jet black mottled with green, her eyes an icy blue]

You need not fear, child. We gods of death are not all evil — if anything...

[she changes again, her face now half-black and half-pale]

...Neutrality suits us better. You have been forsaken, but you need not give in to evil. I can guide you on a better path, if you will serve me. With the power I can grant you, your task will be simple, and you will be free to do my works.

The priests of Thor and Odin lied to you, Durkon, sent you into exile on a fool's errand… but henceforth you shall be my High Priest, and you shall go where you wish.

Aye. I spent a whole lifetime as a… a sheep.

Now it is time to be a shepherd. You will lead thousands to me. And when I am Queen of all the Dwarven dead, as was ever my right, you will stand honoured at my side.

A Song Of Ice And Fire fanfic; "The Faceless Girl".

Summary: A Braavosi urchin dreams of a former life. Contains A Dance With Dragons spoilers.

The girl crept through the window into the dark bedroom of the inn. The air outside was warm and still, so no breeze disturbed the man sleeping on the bed as she padded across the floor. He was bald, with a small white beard, and he lay on his back with his mouth open. Too easy.

"Harys Swyft" the kindly old man had said. "I do not know this man", she had replied, and now she had to make sure that it was true. She took a long look at his face; she had found it hard to remember who she knew and who she did not, lately. Merchants, fishermen and whores would call out to her in the street by different names, names which stirred memories but were not hers. Sometimes she was not even sure what her name was. Nymeria fluttered through her mind, but that was not right.

The girl took a small glass vial from her pocket and dabbed a single drop against the bald man's upper lip. Fast asleep, he licked his lips and muttered something indistinguishable. "Valar morghulis", the girl whispered in reply. She perched by the window as his breathing faltered and shallow gasps escaped his blackening lips, but he did not struggle or waken. She did not know why this man must die, but she had heard talk of the Iron Bank from the other servants of the Many-Faced God. They made many prayers at the House of Black and White, and paid handsome tribute in return, though the girl wondered why anyone would want to kill someone who owed them money. From his clothes, this man looked like a Westron lord, she reflected as she kept her vigil - hopefully he would find his way home for burial. When he was dead, she crept out the way she had come.

As she snuck past the next window, the girl stopped at the sight of something inside. Three men slept within, one on the bed and two on the floor. On a sideboard stood three suits of armour, all coloured red and chased in gold but for one odd piece. The leftmost helm was bare, polished steel, fashioned like a bull's head, though for a brief moment she had thought it was a dog. A fine-looking piece, but the girl was puzzled that she could not seem to look away. She felt her fists clench, felt a tingle in her stomach. She wanted to frown and laugh at the same time. She bit her lip. Run away, your mission is done, you must not be found, she thought, but her feet were planted. She looked again to the sleeping men, and names started to echo in her head. More names she did not recognise. Dunsen, Polliver, Raff the Sweetling, the Tickler and the Hound. Were they the men inside? Ser Gregor, Ser Ilyn, King Joffrey, Queen Cersei. These last two confused her even more. King Joffrey across the Narrow Sea was dead - poisoned with the venom of the indigo viper, the old man had said. She knew little of Queen Cersei, but the thought of her name made the girl flush with anger. Lady. Nymeria. Sansa. She wanted to scream. Lady Nymeria? The daughter of Oberyn Martell was a Lady Nymeria, but the girl could not picture her face. Did she kill Joffrey? The old man said the Dornish were fond of poisons, especially the women. She repeated the name, it seemed... important. Nymeria. Nothing came. She heard voices, and saw that it had grown lighter as she sat outside. She cursed herself for sitting in the open so near her work, and dropped down into the shadows and away towards the House of Black and White.

As she slept through the day, the names echoed in her head. Nymeria. Cersei. Lady. Sansa. Sandor. Hound. She dreamt of a great snarling wolf, standing in front of her. She threw stones to drive it off, but it did not move, and she felt its pain as the stones hit home. When it finally turned and ran she wept with grief. Nymeria. Now she was the age-old Queen of the Rhoyne, watching her ships burn as she stood on the Dornish coast. A man ran from the ships, his arm and face on fire, screaming and crying, and she hated him and pitied him. He begged for death, but the proud Queen turned and walked away as he died in pain. Nymeria. Her army was arrayed before her, now olive-skinned men in chariots on the sand, now a great pack of wolves among rivers and forests. She craned back her shaggy head and howled, and her pack joined her in harmony. She felt her brothers join the song - her great black brother who dreamed he was a man. Her quiet white brother, who never made a noise, howled now, mad with grief. Her grey brother seemed to appear before her, looking into her soul, and she thought of summer though he was surrounded by ice, dark and hard and cold. Stark. He spoke in a human voice, and she did not understand. Naymerria, the name slurred in her confusion. Naym. Arria.

The wolf-queen was hunting now, alone. The prey was great and slow, and she caught it easily, but it turned fierce eyes on her and pawed the ground. She leapt at the beast and it threw her off, charged, caught her on its horns and threw her. Her pack was gone. There was only her and the bull, rolling and fighting, but now they were a boy and a girl, and the fight was not fierce, but exciting. The strange wolf-girl was angry at her own excitement, but the bull-boy was laughing. Gendry. Now he was a man with a bull's head, pinned down, helpless. It was not him laughing, but a man, who wrenched the bull's head off and kept it for himself. The girl felt hatred in her breast. Dunsen. Polliver. The Tickler and the Hound. The girl was stabbing a man over and over, screaming at him as his blood covered her. "How many? How many? How many?" The man lay dead in the dirt, and the girl ran off and hid her bloody sword under a staircase. When she returned, he was not dead, but asleep on a wooden floor. The faces of the men at the inn drifted back to her. Dunsen. Valar morghulis. 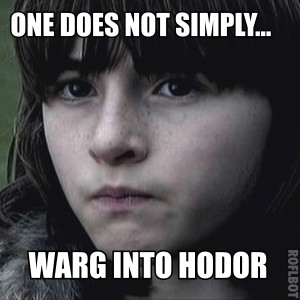