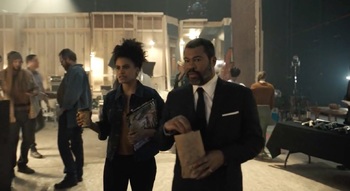 "If you're worried about anything, you should be worried about the fact that you are apparently in an episode of The Twilight Zone right now."
Jordan Peele: Witness Adam Wegman, a writer who, up until tonight, has never paid much mind to the idea of an artist's social responsibility. He's about to learn that there's more to art than entertainment. He's about to— You know what? I think we can beat this. Um, is Sophie here?

Jordan Peele: Picture, if you will, a storyteller finally getting to tell the story of a lifetime, except the story is one of inexplicable terror and the lifetime is her own. Her name is Sophie Gelson. She has little patience for childish diversions or daydreams. But she won't be able to tune out or turn away from what lurks, blurry, in the background of her own show. She is about to learn that when blurry comes to focus, there can be no escape from the fate laid out for her... in the Twilight Zone.

A writer is haunted by a mysterious figure.

Rod Serling: "What do we do when our world is turned upside down? When everything we thought to be true is ripped away and are forced to face a new reality. Sophie Gelson has just awoken to the fact when we put away childish things we may be closing our eyes instead of opening them. And that perhaps our only hope is to face all reality, a multitude of truths, not shrinking from that vital, arrogant, fatal, dominant 'X' beyond imagination, but to embrace it, to open ourselves to the unknown. Not the end of the story but a new beginning... for the Twilight Zone."