Recap / My Little Pony: Friendship Is Magic S7 E11 "Not Asking for Trouble" 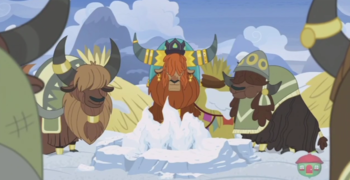 When life gives you snow, build a fire with it...
"This trip has to be perfect! After all, we're not just visiting as friends. We're on official friendship ambassador business!"
— Pinkie Pie
Written by May Chan
Advertisement:

Pinkie Pie bursts through the doors of Sugarcube Corner and tears through Ponyville in a joyous blaze. Upon arriving at Twilight Sparkle's castle, Pinkie shows Twilight a scroll that she received extending Pinkie an invitation to attend the yaks' annual tradition of "Yikslirbirtfest" in Yakyakistan (which she had begging for a chance to go see). Twilight is enthused by the chance to learn more of the Yakyakistani culture and dubs Pinkie her official ambassador of friendship to the yak people.

Pinkie flies out to Yakyakistan in a hot air balloon and is greeted by a large rumbling coming from inside the walls. Upon peering inside, she sees Prince Rutherford, the leader of Yakyakistan, leading his people in a round of destructive stomping. He greets his guest and explains that the stomping is the tradition of Yikslirbirtfest. Prince Rutherford takes Pinkie Pie through the town and introduces her to elements of their culture.

After Prince Rutherford gathers his people around the communal firepit to tell a ceremonial tale, the sound of a large horn is heard through the village and the Yikslirbirtfest stomping resumes, with Pinkie Pie gleefully joining in. However, the shockwaves caused by the stomping dislodge snow from the nearby mountain and an avalanche rains on the village. Pinkie grows concerned but Prince Rutherford scoffs at her worry and says it's a normal part of the annual festival. He orders the other yaks to try to dig out the town but they barely manage to make a dent in the packed snow with lots of effort and continued digging results in more shockwaves that cause even more snow to fall on the village.

Pinkie offers to get her friends to assist in removing the snow but Prince Rutherford flatly refuses and says he and his people can just wait for the snow to melt, making do with the situation and saying if Pinkie has a problem with that, she will simply be banished. Pinkie reticently agrees to maintain her diplomatic duty, but sees Prince Rutherford's solution as ineffective and possibly dangerous to the well-being of his people. She tries to convince the prince to ask for assistance through a story but Prince Rutherford fails to understand the meaning, insisting that those who ask for help are weak and that those who try to provide help are just being nosy. Pinkie then tries to use reverse psychology to persuade Prince Rutherford to seek out Twilight but he responds by telling her of a time when he sought help and never got any. However Pinkie sees through the story and realizes it's all a fabrication to maintain his stubbornness.

Prince Rutherford follows through with his earlier threat to banish Pinkie for interfering with his leadership and she storms off back to Ponyville. Prince Rutherford continues to try to keep the status quo in Yakyakistan in Pinkie's absence but the rest of his people start to lose their confidence in his leadership. Meanwhile, Pinkie Pie tells her friends of what happened and they all agree the yaks need their help but that it must be done surreptitiously in order to maintain the yaks' sense of pride.

The six friends all fly back to Yakyakistan and sneak inside the walls of the village. They get to work clearing the snow and restoring the town while all the yaks sleep. Upon waking up, Prince Rutherford sees the village is back to normal and thinks they managed to outlast the snow before seeing Pinkie Pie's tail disappear beyond the gates of Yakyakistan. Pinkie and friends try to leave before being noticed but the prince catches up to them and thanks them for helping without being asked. He restores her status as an honorary yak and offers her a horned helmet. She accepts the gift graciously but concedes that it is a bit heavy for her head.