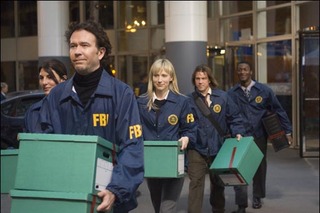 Just a group of ordinary FBI Agents going about their business.
"People like that... corporations like that, they have all the money, they have all the power, and they use it to make people like you go away. Right now, you're suffering under an enormous weight. We provide...Leverage."
—Nathan Ford

In a Chicago pub, former insurance fraud investigator Nathan Ford is downing the latest in a string of drinks when he is approached by aerospace executive Victor Dubenich. Victor tells him that his plans were stolen by a rival company, and he wants Nathan to help steal them back.

The stolen plans are computer files being held in an extremely well guarded office building. To get in, Victor has put together a team of individuals with the skills he needs: Playful Hacker Alec Hardison, Lightning Bruiser Eliot Spencer, and Classy Cat-Burglar Parker. Nate wonders why he is being included in all this and Victor tells him he needs one honest man to manage them: not only are these people used to working alone, they're criminals, and Dubenich needs someone he can trust.

Nathan turns him down at first, until Dubenich tells him that the rival company is being insured by IYS, Nathan's former employers. He reminds Nate of how IYS refused to pay for his son Sam's treatment, leading to Sam's death, and points out that this job would do serious damage to the insurance company. Nathan agrees to help.

The team heads to the headquarters of Pierson Aviation, the target of their heist. After a few close calls, they manage to find the files and download them, bluffing their way past the security at the front to escape. Once they're away, they send off the files. Nate promises the team that their money will be transferred before morning, and so they go their separate ways.

In the morning he gets a call from an angry Victor who tells him the files never arrived. Nate knows they were sent, but Victor isn't having it and demands to meet him at an old warehouse owned by his company. When Nate arrives he finds the others already there, at each others' throats. Nate laughs at the ridiculousness of the whole situation, until he suddenly realizes they've been Lured into a Trap. Everyone runs out of the building, but don't quite Outrun the Fireball. When they wake up, they find themselves in the hospital, all under arrest.

Thanks to Nate's quick thinking, a couple of stolen cellphones, and a hijacked printer, they manage to con their way out of the hospital by convincing the police that Hardison is a deep cover agent infiltrating their gang.

They go to Hardison's apartment to examine the files they stole. Thanks to a Coincidental Broadcast, they hear that Pierson Aviation is saying that their designs were stolen. When Hardison goes through the plans, he finds evidence that they really were Pierson's designs, with no evidence that Bering Aircraft ever had anything to do with it.

Suffice to say, the team is pissed. Not only have they been lied to, manipulated, and nearly killed, they didn't get paid. Hardison starts to pass out fake IDs and plane tickets to get them all out of town, but Nate stops him. They could run, or they could get revenge. Why does Nate care so much? Dubenich used Nate's son.

The team, already having noticed how smoothly the last few cons went with Nathan at the wheel, agree. But first they need a new player, someone Victor doesn't know.

Nate takes them to a small theater, where a woman onstage is absolutely butchering her role as Lady Macbeth. The team, except Nate, are suitably horrified, and ask how on earth this woman is supposed to help.

Nate: This isn't her stage.

Afterwards, they find her outside, where Nate introduces her as Con Artist and master Grifter Sophie Devereaux. After introducing her to the team and explaining their situation, he convinces her to help them out.

At Victor's company, Sophie introduces herself as a developer from South Africa, and expresses interest in Bering's new plane. She gives a wonderful performance, surprising Hardison; Nate tells him that Sophie is the greatest actress, but only when she's breaking the law. Meanwhile, Hardison crashes Victor's secretary's computer, which allows Eliot to get in disguised as an IT guy. He starts flirting with her, which allows Parker to get into Victor's office and plant a transmitter. Sophie manages to convince Victor to discuss terms and arranges to meet again.

The next day, Sophie meets him at an office building and leads him to a suite where several African men are seated around a table. As the meeting progresses, one of them writes something and hands it to Sophie, who gives it to Victor. He looks at it, and sees a quoted sum of $1,000,000. He accepts.

After he leaves, Nate regroups and says they have a very long day tomorrow. That night, Victor finds and removes the transmitter. Sophie's deal was too good to be true and he knew something was up. He realizes his "employees" survived their "payment". He knows none of the deal is real, not even the Nigerian "ambassadors". He contacts the FBI, planning on exposing Sophie and her team at the next meeting.

At a shareholder's meeting the next day, Sophie brings the Nigerians to Victor's office. When he gets there he calls the FBI in to take care of the con artists — only to have them arrest him instead, for soliticing bribes from government officials. He protests that they are fake, but the Nigerians produce their passports revealing them to be genuine ambassadors, while Sophie slips away.

In flashbacks, we discover that after the Nigerians arrived for the first meeting but before Dubenich got to the office, Eliot switched the signs from Bering's to Sophie's company. The entire time, the Nigerians were under the impression that Sophie was working for Victor. The Nigerians claim that Victor was given a requested bribe of $200,000, as Victor realizes that during the meeting Sophie switched envelope containing the check with the quote. In the end the FBI enters the building while Nate and his crew, disguised as FBI agents, manage to take some papers out of his office.

Nate then returns the plans to the Pierson, who drops all charges against Nate's team, intending to start a lawsuit against Victor instead. As Nate leaves, Pierson assumes he wants money, but Nate tells him that they have an... alternative revenue source.

As a despondent Dubenich watches FBI agents digging through his office, he recieves a call. It's Nate, who informs him that he should have just paid them, and that if he rats them out to the FBI, they won't be as nice. Dubenich hangs up as the FBI discover piles of 'bribe money' in his desk.

After regrouping with the team, everyone finds out they got checks that are way higher than they expected. Hardison informs them that he played the stock market to maximize their profit.

Checks in hand, the team splits up again... only to come right back, telling Nate they had a great time working as a team and want to do it again. Nathan says he has no intention of becoming a thief. Sophie suggests they look for more "bad guys" to take down instead.

Meeting with their first new client, Nate explains their purpose. "We provide... leverage."