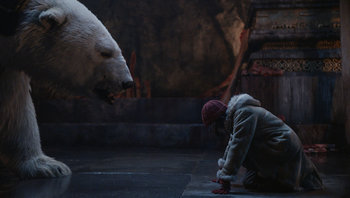 Lyra survives the fall, but is captured by an armoured bear and taken to Iofur Raknison's palace on Svalbard. She convinces Iofur that she is Iorek's artificial daemon, created by scientists at Bolvangar. Lyra manipulates Iofur to fight Iorek in single combat to claim her. Iorek wins, although is badly wounded. He becomes king and reunites Lyra with Roger. They travel to Asriel's laboratory. Meanwhile, Mrs Coulter, Father MacPhail, and the Magisterium's soldiers are headed for Svalbard to find and kill Asriel. Elsewhere, Scoresby and Hester have crash-landed. Serafina arrives and says the others are safe but Lyra needs help. Lyra, Roger and Iorek climb into the Svalbard mountains and reach Asriel's laboratory. Lyra and Asriel are reunited, though her arrival initially distresses Asriel. Meanwhile, Boreal crosses back to the alternate world and visits Elaine Parry, who resists sharing information about her husband. Will and Elaine return home after Boreal's mercenary has broken into the house. Suspecting that someone may still be there, Will takes his mother to a neighbour’s house and returns later to retrieve his father’s letters. When Thomas and the Pale-Face Man come back, Will kills Thomas in self-defence, then flees.