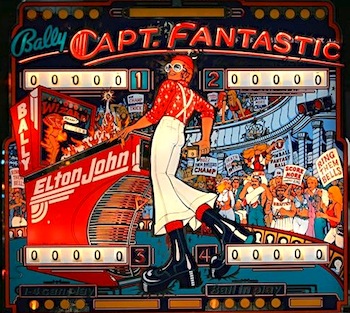 Captain Fantastic (Full title: Capt. Fantastic and the Brown Dirt Cowboy) is an arcade pinball machine designed by Greg Kmiec and produced by Bally in 1976. A semi-sequel to Bally's earlier Wizard!!, it's named after the chart-topping pop album by Elton John, and features John dressed as the Local Lad from the rock opera movie Tommy. The game's eye-catching artwork, approachable gameplay, and Elton John's popularity made it one of the most produced electromechanical pinball machines ever. Enthusiasts consider it one of the iconic pinballs of the '70s.

In a blatant appeal to Fanservice, the table is festooned with large-busted women all over its backglass and playfield art. Unbeknownst to Bally management, artist Dave Christensen also included several risque bits in the backglass, including a guy flipping off the viewer and a woman enthusiastically grabbing the groin of a man behind her. Bally responded by adding small mirrored stars over the objectionable parts, though they didn't completely obscure the art.

A home version of this pinball was produced, with an entirely different layout, family-friendly art, and shorter legs (to better accommodate children).