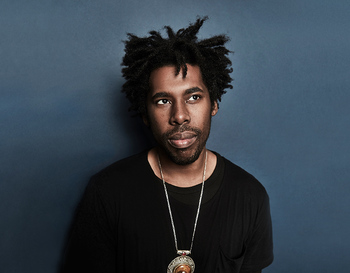 Steven Ellison (b. October 7, 1983), better known as Flying Lotus (sometimes abbreviated as FlyLo), is an American producer, musician, DJ, rapper, and filmmaker based in Los Angeles.

While he first began releasing work in 2005 (quite straightforward if slightly off-kilter instrumental Hip-Hop with explicit J Dilla influence), he would gain widespread recognition for his work from the late 2000s to early 2010s. This work is arguably some of the most famous to be attached to the "wonky" genre, a mix of hip-hop with dubstep and IDM elements. His music also became known for its aesthetic focus on psychedelia and spirituality (likely a byproduct of Ellison's direct relation to Alice and John Coltrane) and intricate, futuristic sound design, giving his work an unparalleled sense of character.

Aside from this, this era of his music has also become quite synonymous with [adult swim], as it was used on a noticeable basis for their bumpers. Around the time the opportunity for him to submit music first opened, he had a day job interning at Stones Throw Records, while he spent his nights working on what would become his debut album, 1983, which would release in 2006. He signed with Warp Records the next year, and became one of the label's cornerstone artists shortly afterwards, even founding the indie record label Brainfeeder.

However, he would go on to widen his artistic horizons, with his 2012 album Until the Quiet Comes initiating a shift in interest towards jazz, and run-ins with artists like Odd Future and Shabazz Palaces inspiring him to commit to established hip-hop work. It was also around this time that a villainous animated rapper-cum-cult enthusiast named Captain Murphynote named for the character from Sealab 2020 mysteriously surfaced, inciting mass press speculation (centered squarely around the OF crew) as to the Captain's identity. This culminated in November, with the release of his mixtape/short film Duality, and the Captain's first live show several weeks after. While he took the stage in a mask and cloak, he eventually unveiled himself, revealing to the world that he was in fact Ellisonnote although his identity had been all but leaked beforehand, and the big unmasking was even preceded by chants of "Lotus!".

Ellison would later take on a new form of expression by announcing Brainfeeder's branching into films in 2016, with the division's first main release being a film of Ellison's own co-writing and direction (although he's credited simply as "steve"): Kusonote Japanese for "shit", an anthology film about the mutant survivors of an earthquake that destroys Los Angeles.

Apart from all of this, he's got an impressive catalog of production credits

and scoring credits on various short films and series.