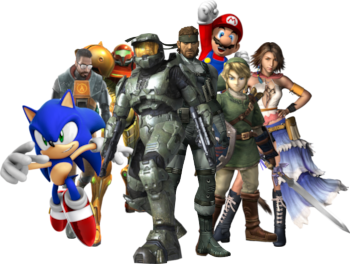 So the fastest thing alive, a scientist with a crowbar, a galactic bounty hunter, a super soldier, a legendary stealth operative, a heroic plumber, a sword-slinging hero, and a self-sacrificing summoner walk into a bar...
"The game is of such a character that it requires care and skill in playing it or operating the device with which the game is played. Skill can be increased with practice and the exercise of care contributes to success."
— 1947 Patent for the Cathode Ray Tube Amusement Device
Advertisement:

A means of visual entertainment, coming in the form of electronic games that rely on the input of a character through user interface. The idea of operating games electronically is old, OXO was an automaton built in 1952 that could play Tic-tac-toe perfectly against a human player, but the first "pure" video game is considered to be Tennis for Two in 1958.

Video games by virtue of their interactive nature have unique tropes associated with them, the Video Game Tropes.

See also Gamebooks for a literary precursor to modern video games; Pinball, the distinguished Arcade Gaming predecessor of video games; and Visual Novel for videogame-like works in the narrative style of literature.

Games by country of origin