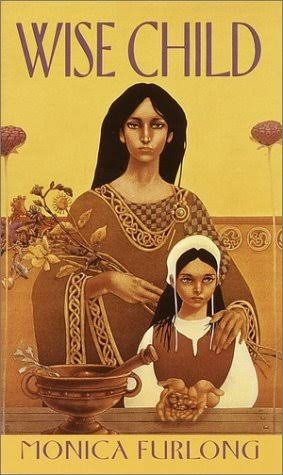 Wise Child is a Low Fantasy novel by Monica Furlong, published in 1987.
Advertisement:

In a remote Scottish village, nine-year-old Wise Child is taken in by Juniper, a healer and sorceress, after the death of her grandmother. When Wise Child’s estranged mother, Maeve, a black witch, re-enters her life, the girl must choose between the more difficult but rewarding life of Juniper and the luxurious but empty life offered by Maeve.

But danger is imminent in the village, where the people are superstitious and ruled by the teachings of local priest Fillan, who denounces Juniper as a witch and a heretic for her outsider ways. In living with Juniper and undergoing mysterious tests and a trial of faith, Wise Child discovers the extent of her supernatural powers—and her true loyalties.

The first of the "Doran trilogy", followed by Juniper (1990) and Colman (2004), which serve as a prequel and sequel, respectively.