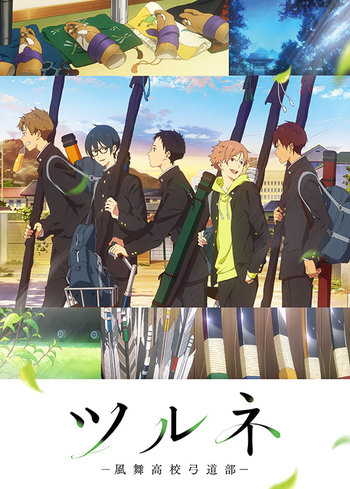 From left to right: Ryohei, Seiya, Minato, Nanao and Kaito.
Minato Narumiya used to be part of his middle school's archery club until a certain incident in his last middle school tournament caused his team to lose and him to run away from archery for good. He advances to his local high school, Kazemai, where his childhood friends Seiya Takehaya and Ryohei Yamanouchi are also attending. They try to get him to join the school's archery club, but still haunted by his middle school trauma, Minato refuses and runs away on his bike and into a forest, where he stumbles into a lonely archery range with a mysterious man practicing there. Despite his previos vow to never touch a bow again, Minato can't help but be mesmerized by the man's beautiful tsurune (sound of bowstring), and ultimately decides to overcome his past issues and join his school's archery club.
Advertisement:

Now, along with his old friends and new teammates Kaito Onogi and Nanao Kisaragi, Minato and his team aim for winning the prefectural tournament. However, the journey there isn't easy...

Tsurune: Kazemai High School Japanese Archery (Kyudo) Club is a two-volume light novel series by Kotoko Ayano and illustrations by Chinatsu Morimoto. The first novel won the Special Judge Award at the 7th Kyoto Animation Awards in 2016. It was adapted into an anime by Kyoto Animation which ran on NHK from October 22, 2018 to January 21, 2019. The show was directed by Takuya Yamamura (making his directorial debut), with Michiko Yokote serving as series composer, Miku Kadowaki serving as character designer, Nobuaki Maruki serving as chief animation director, and Yasuhiro Takemoto serving as supervisor. The series is legally available on