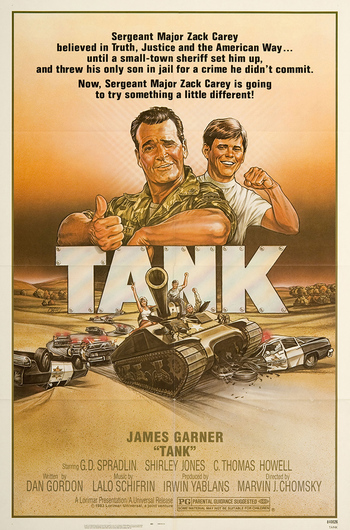 Tank is a 1984 action-dramedy film starring James Garner (from The Great Escape and The Rockford Files primarily, but also the antagonist of Atlantis: The Lost Empire), Shirley Jones (The Partridge Family; Oklahoma!) and C. Thomas Howell (Red Dawn (1984)), and also James Cromwell (Babe, Star Trek: First Contact, The Green Mile, Space Cowboys, The Sum of All Fears, I, Robot, The Longest Yard and Surrogates) and G. D. Spradlin (The Godfather Part II and Apocalypse Now) as The Dragon and the Corrupt Cop, respectively.

Tank has examples of:

Example of:
Calling Me a Logarithm