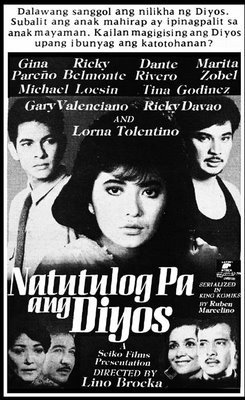 Natutulog Pa Ang Diyos (lit. God Is Still Sleeping) is a 1988 Filipino drama film based on the original novel of the same name by Ruben R. Marcelino.

Patria Ramirez and and their boss's wife Rose Velasco give birth together during a dark and stormy night while driving towards the hospital. The midwife makes it clear that he has a son while the other had a daughter. To ensure that their son will have a better life and not having to suffer poverty and hardship like they did, he decides to give the son to Rose, making her and their boss think that she had given birth to a boy, eventually Christened as "Andrew", while only he and his wife know about this. As a result, the children grow distant from their families and out of frustration of having to give up her real child, resorts to maltreating Gillian, the Velasco's real child. However, the children who were not aware of being switched at birth find themselves drawn closer to each other's respective parents. Gillian finds comfort with Andrew's mother and vice versa. She eventually finds comfort with Mark, a rich suitor. Jealous of Gillian's new found attention, Andrew decides to force himself on Gillian, an act which leads to the revelation of the secret of their parentage.

It was remade in 2007 as a TV series entitled Natutulog Ba Ang Diyos? (lit. Is God Still Sleeping?)